Vee Hua 華婷婷4 min readSeptember 29, 2015Add comment
Devastation Melody opens with a striking sequence. Dressed fairly androgynously in dark-colored linens, Lucy Yim recalls a Chinese railroad worker — an image made all the stronger as she slowly uses rope to pull nine cinderblocks towards her. After assembling them into a massive Pangea, she mounts their seemingly solid surface and begins to rock back and forth like an immigrant on the high seas. She begins to sing; and as the minor-key melody exudes from her lips, it is reminiscent of an old slave song, and one feels a sense of deep sadness watching Yim, who gradually discovers that the cinderblock foundation she has created is indeed quite weak, crumbling easily beneath her feet. 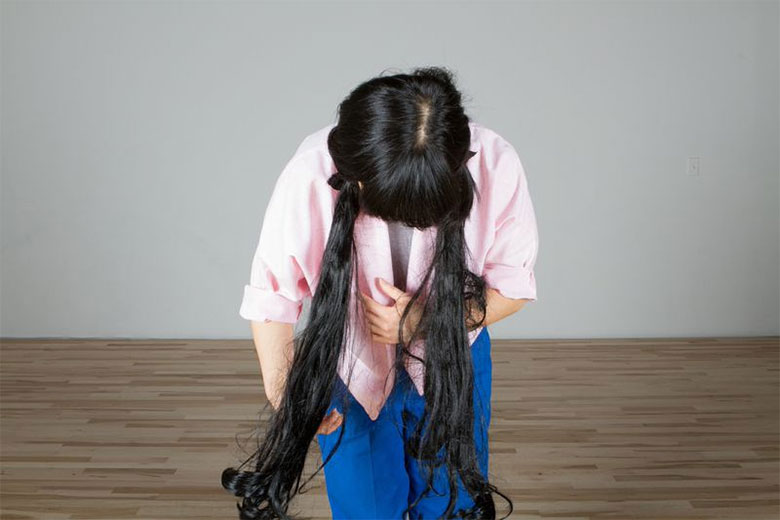 From here, Yim steps off the blocks, and her melody continues as she leads the audience from PNCA’s outer atrium into an inner performance space. Awkward and bumbling, she moves with sea legs that have just descended upon land. This is the main portion of movement in the entire piece — and Yim is dizzying, rhythmically doing about-faces as she trips backwards into the next room. Every step looks like the stumbling loss of control, though the movements are in fact calculated, poised, and precise.The Lego Batman Movie (2017)

Yim’s strength lies in her ability to introduce softness and juxtapose it with difficult feelings, which Devastation Melody does not shy away from. Halfway through the performance, she tells a story which echoes that of many ethnic children growing up in mixed-culture societies; she speaks of growing up in a white community and being told her home was “unsafe” after she began dating a Mexican immigrant. It was Yim’s first time experiencing that type of heartbreak and sadness — and to illustrate the point, she pairs the narrative with the physical act of drawing a silly face on a trash bag. Eventually, the trash bag is worn like a costume she tears off while repeating a mantra. In the deliberate act of removal, she seems to achieve a sense of catharsis, if only for a moment.

View all of our TBA Festival Coverage through the years.

Devastation Melody is rooted in “heart on the sleeve” simplicity and mundane movements galore. In one segment, Yim dons an apron and opens the curtains of the performance space, like a Korean restaurant owner setting up a shop in the morning. She then floats across the room and places eggs in rice cookers, and eventually, the sound of their boiling becomes ambient noise — one of the few sonic components in the entire piece. As Yim moves stealthily and without much fanfare, observing her feels like observing someone in the privacy of her own room, or again, like observing a shopkeeper who is running through the motions, quite unconcerned with how they might look to others. This is vulnerability, in a public space.

Devastation Melody is much more of a performance piece than a movement piece, much to the confusion of audience members who may have been expecting something different. Yet what’s important here is the narrative — about the push and pull of the interior and the exterior worlds, as they relate to race and one’s intimate and societal connections to it. And there is much more to read into. The number three plays heavily into the work, through the appearance of eggs, pedestals, and rice cookers — all numbering three — and even rhythms that are syncopated on their third beats. These objects also mirror the structure of the piece. Devastation Melody is divided up into three main parts, broken up by the physical movement of Yim leading the audience in and out of rooms. And as hinted by the powerful introductory scene and by Yim’s reeling steps, Devastation Melody sways back and forth throughout its duration, finding even ground only to lose it again.

Is there an end to such meanderings, as a performer looking to find one’s place, or as a human being out in society? Perhaps not. And, depending on one’s perspective, in that uncertainty is where the devastation can sometimes lie.