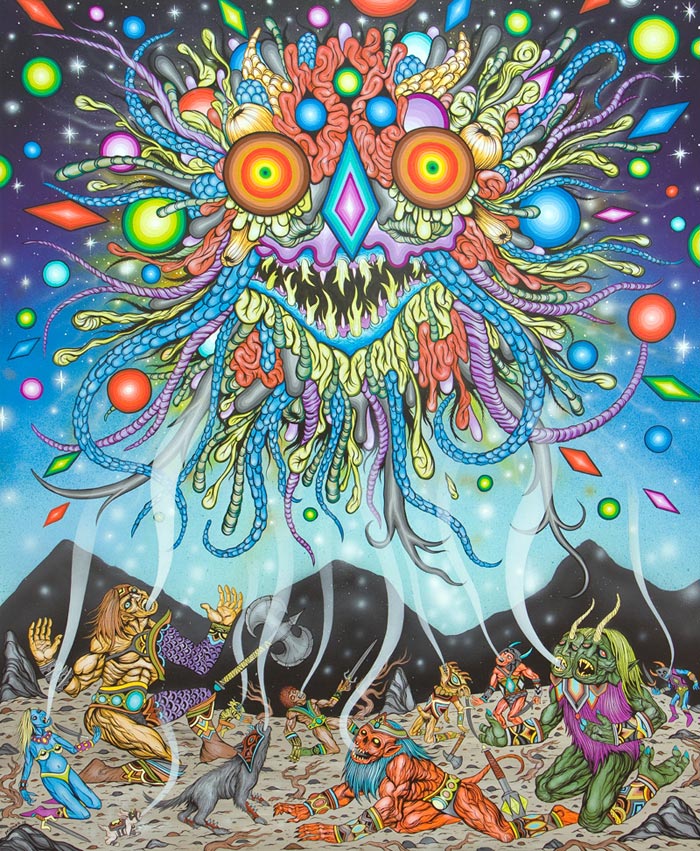 “… I’m trying not to turn my back on… the origin of exploration and discovery that I had when I was a little kid. If you turn your back on that, then you’re done… you’ve lost the thing that started it all, that made it beautiful, that made things strange, and new,”

I first came across the work of Skinner in 2009, at his first ever solo show at San Francisco’s 111 Minna Gallery, entitled Worship Thee Kindly The Dark Hand That Guides Me. I became an instant supporter. 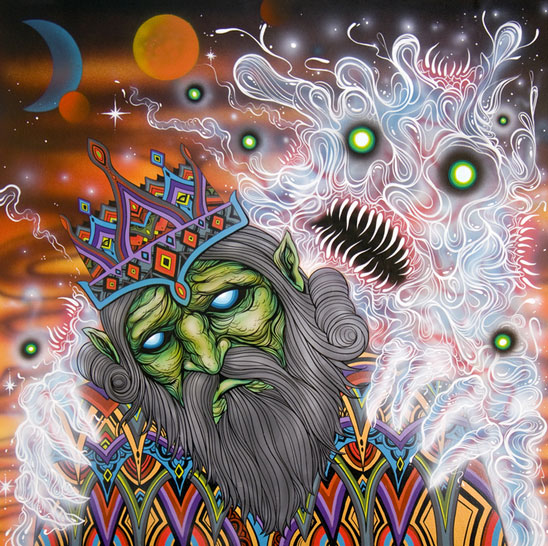 In Skinner’s art, fantastically dark elements, such as helmeted guards and reptilian creatures, collide with the bright spirit often found in the street art community. His style captures the contrasting ideas found in many of my favorite created works — a fine art equivalent to black comedy in film or humorous dark prose in literature. He takes a subject matter you might find on the cover of a fantasy novel or an album cover for a metal band, and spins it on its head, creating detailed mixed media pieces that hint at a marvelous world of mystery. Through Skinner’s eyes, things as simple as houses become intricate, geometrically-lined portals into starry universes, and monster-like characters come across as both terrifying and adorable.

And this all makes sense when you learn about Skinner himself — a man who lives somewhere between a world of darkness and lightness. On paper, his name is reminiscent of The Texas Chainsaw Massacre — until you discover that Skinner is a nickname he’s had since the age of 5, and that it actually morphed out of “Pumpkin.” You might become intimidated when you learn that Skinner plays in a black metal band called UNGOLIANT, but that’s quickly diffused when you learn he also has a dance music project called Absolute Warriors. In reality, Skinner is cynical and jaded, yet also communicative and generous. He even went so far as to lend a stranger such as myself a comic book by Daniel Clowes, one of his favorite artists, simply because I confessed my lack of knowledge in that arena.

One day during Northern California’s sunny winter, Skinner invited me to his home in Sacramento, California. It turns out that the city of Sacramento, under a project called SurrealEstates, offered Skinner and ten other visual artists spaces to “self-build a unique artist- centered compound of 11 affordable single family homes with detached studios.” I didn’t know what to expect, but imagined an artist commune of sorts, where a collection of 20-something artists could gather to pat each other on the backs and throw parties to celebrate their artistic successes.

“I’m trying to do my best to balance making enough money to live, so that I can have enough time and space to preserve what I love about being alive…”
– Skinner

I was wrong. Though Sacramento has a reasonable music scene, its art scene is lacking. Peer groups supporting one another in art — particularly in a style like Skinner’s — are certainly not easily found. His home is not a run-down commune, but a stand-out, eco- friendly space. SurrealEstates would fit in on any bustling street in a Pacific Northwest neighborhood, but in this part of Sacramento, the housing units actually jump out, serving as a bright speck amidst relatively depressed surroundings.

Inside Skinner’s home, visitors are greeted by a brightly-colored, hand-painted staircase, outfitted with patterns and designs that have become staples of the artist’s style. The high, sun-roofed ceiling connects to walls that are covered from top to bottom with artwork. Behind the house is the studio Skinner occupies with his assistant, fellow artist and designer, Hal Rotter. Like the house, the studio is brimming with activity; the walls are absolutely slathered with posters of metal bands, and Skinner’s plastic toys, inspired by Dungeons & Dragons, have laid siege upon a table. Canvasses are sprawled out, each awaiting the next stage in Skinner’s highly-detailed and multi-step creative process. Inspiration is endless, found in a fascinating array of comic books and books on symbolism, ancient art, science fiction, and fantasy.

Skinner is a human sponge of an artist, proud and knowledgeable, and subconsciously filtering through varying influences to incorporate into his art. At the center of it all, though, is a childhood innocence and curiosity.

As a self-professed life-long nerd, Skinner now proudly details his love for everything from Dungeons & Dragons and fantasy to Beastmaster and Ravenloft — the Gothic version of Dungeons & Dragons. But these interests weren’t always so acceptable, and there was a portion of his life where he was alienated for them. “I grew up and was hella depressed; I listened to The Smiths and Camouflage and Depeche Mode, and stuff like that… [but] now, [these things are] becoming sort of popular… but I’m totally afraid that, who knows, a couple years from now, they’ll be like, ‘Stoner metal is totally out, bro! Fantasy is totally out! We’re bringing that grunge back!'” 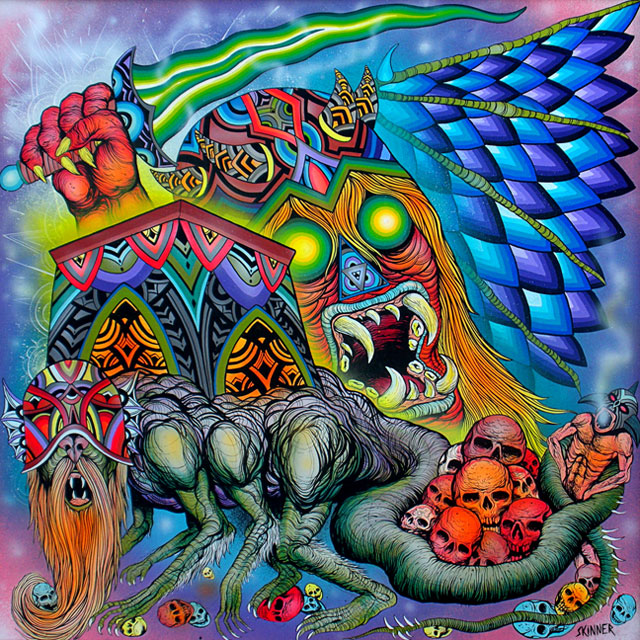 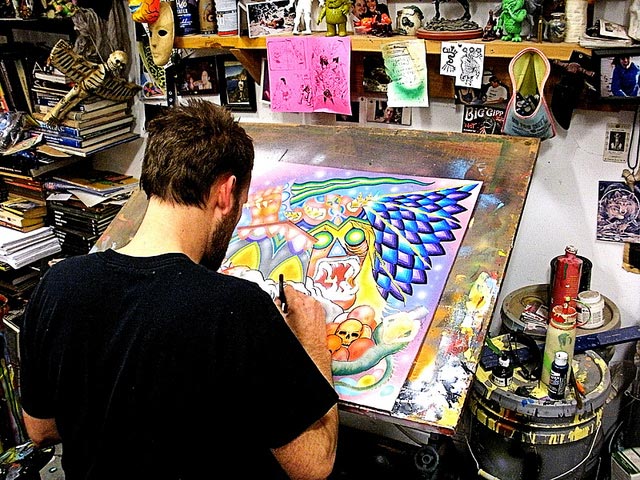 Skinner lumps himself into a generation of 25 to 35-year-olds that grew up during an era with a unique cultural footprint — one that saw the likes of everything from Heavy Metal magazine to Transformers, as well as the widespread popularity of comic books and G.I. Joes. What previously were sideline interests have now become mainstream commodities swallowed by consumers, including unlikely ones who may have shunned them before. Timing plays a part, of course, as those in the aforementioned age bracket are now main players in the workforce, making up a relatively affluent and influential group of individuals. Suddenly, a widespread popularity of fantasy movies, graphic novels, and even psychedelic music and film is taking place, and it is upon this wave that Skinner rides. Yet, his artistic influences are not trite or manufactured to fit the current status quo; they are simply what happens to be popular right here, right now.

“I’m trying to be a successful artist, but I’m trying not to turn my back on my own self and my own origin — the origin of exploration and discovery that I had when I was a little kid. If you turn your back on that, then you’re done. You’re gone. Who even cares what you do anymore? Because you’ve lost it; you’ve lost the thing that started it all, that made it beautiful, that made things strange, and new,” he says passionately. “I think that every single day that I come out here, I’m trying to preserve that, and I’m trying to pay attention to that… I’m trying to do my best to balance making enough money to live, so that I can have enough time and space to preserve what I love about being alive… you know? It’s a really intense kind of dance.”

The struggle between doing what one loves and being a socially-responsible individual is the plight of the 21st century’s conscientious artist.

“I can’t take [making money] seriously, because I feel like I’m just part of the whole thing that I think is a little bit jacked up,” he says, concluding a long diatribe about the never-ending hamster wheel that is “success” — a system that involves going to college, getting a traditional job, purchasing a house, and then raising a family. The route Skinner is taking to success is quite different, but he certainly doesn’t take it for granted.

“[Being an artist is] like being a spoiled little bitch. I’m here; I’m an artist, and look at my palace where I can complain about things. It’s all privilege,” he continues. “Especially in California. In California, an artist is like, the lap of privilege… People are like, ‘Oh, you live in Sacramento; that’s so far away,’ but it’s like, well, I don’t live in Nebraska. I mean, I can drive my car down to San Francisco and be like, ‘Hey, look at me, I’m a big jerk! Look at my paintings!'” 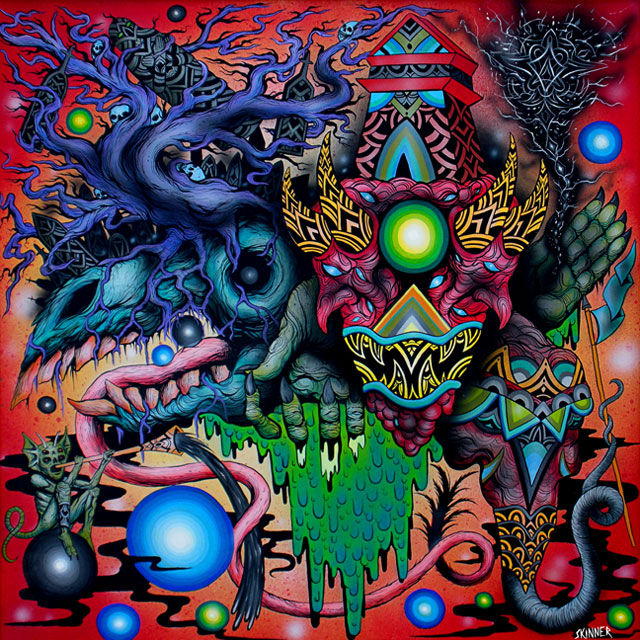 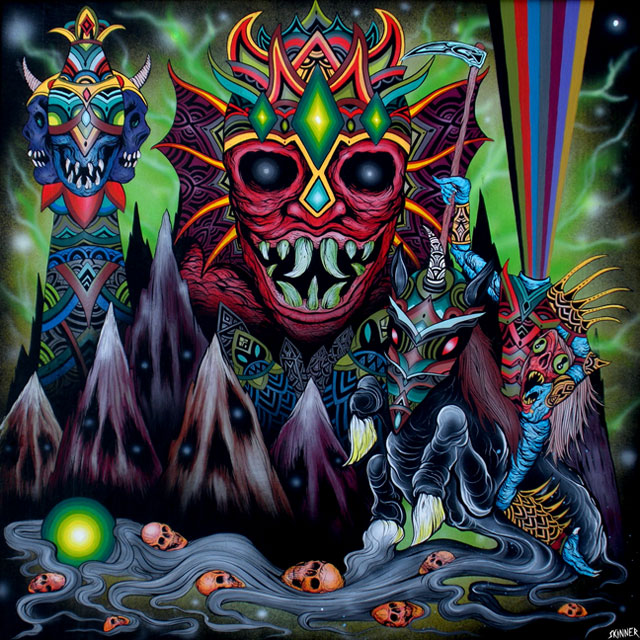 Even if grudgingly so, Skinner is certainly familiar with the ways of promoting his own work, and he is doing fine for himself. In the near future, he has a lot on his plate, beginning with group shows at Flatcolor Gallery in Seattle, Grand Central Arts Center in Santa Ana — where Skinner will be showing with “a bunch of [his] heroes” — and The Museum Of Contemporary Art in Portugal. Also in the pipeline are new vinyl toys, a new book, and a showcase of his video art at the Collective Hallucinations Cinema Festival in Lyon, France. But even with all of this success, Skinner can’t help but mention the politics involved with being an artist in this day and age.

“It’s very class-oriented,” he says, of the art scene. “There’s like, working class art [and] there’s fine art. And sometimes there’s crossover… if you’re lucky, and you’re weird enough, and you do something strange, like throw a pie in the face of a politician, you might get famous. Or, [you might] if you have a profitable level of strange behavior that bourgeois people can invest money into. It’s so crazy. If you really start looking at the art world, and you start looking at the art industry and the way that things are run, it’s totally insane.”

Skinner’s plight may make him sound a bit like a jaded curmudgeon, but his viewpoint is certainly one shared by many mid-sized artists — particularly those who are passionately doing their own things, in a DIY manner. The balance between creating innovative things without compromising one’s own style or beliefs, and trying to make a living, can be difficult. But it is manageable.

For 2011, Skinner aims to work on much more than just art. Aside from the aforementioned projects, he says, “I am taking most of the year off to just focus on painting and discovery and trying to get better at everything and be a better friend and loving person.” 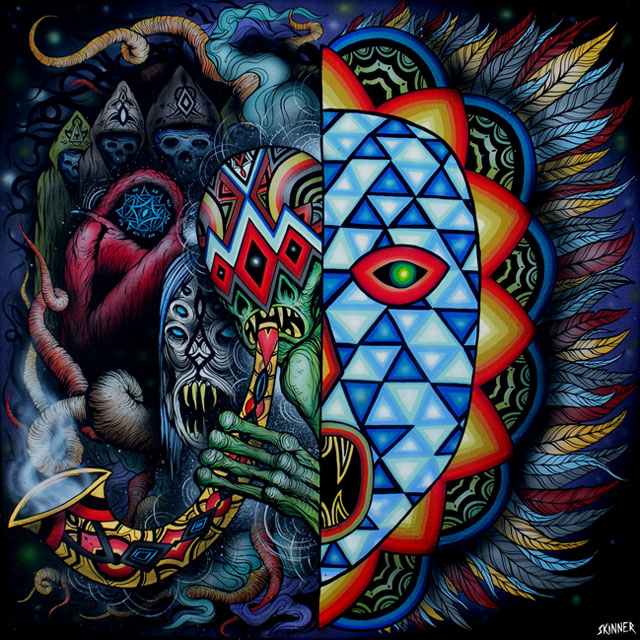 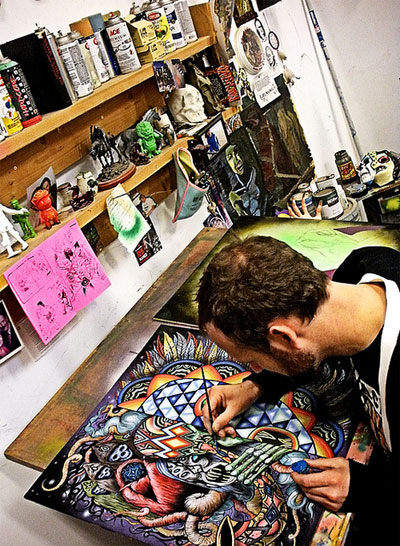 […] 2100952 Pretty wild stuff! for those who want to see more: http://theartofskinner.com/ http://www.redefinemag.com/2011/skinner-artist-interview-two-sides-of-a-metal-coin/ music from his band "Ungoliant": *also, Cartoon Network (and specifically Adult […]