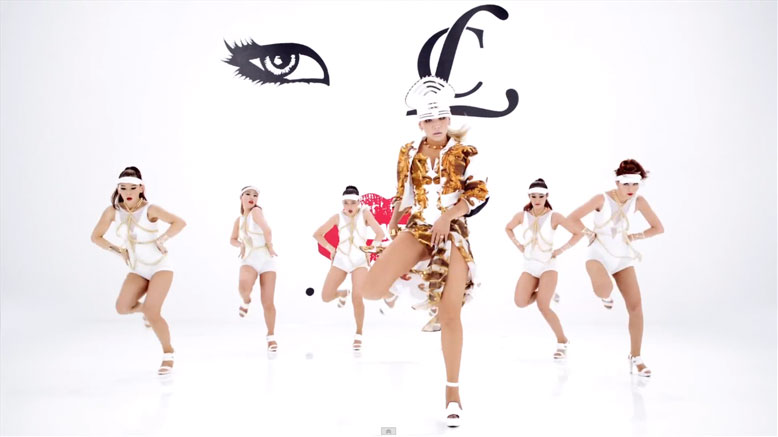 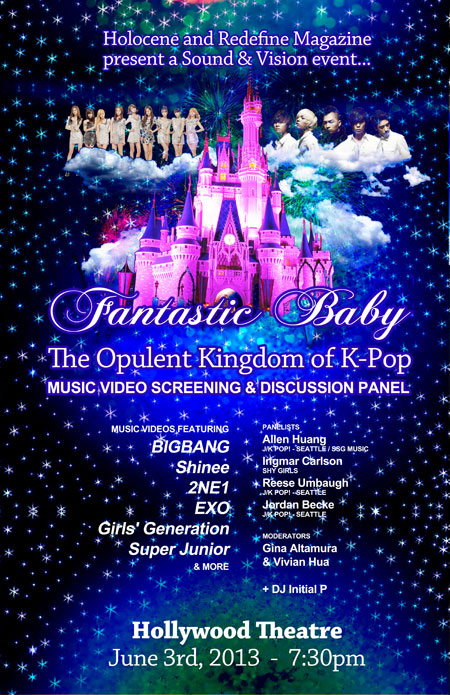 In conjunction with JK POP! — a monthly Korean and Japanese pop dance night in Seattle, every first Thursday at Barboza!

Gina Altamura: I’m Gina Altamura, and I’m the talent buyer at Holocene. I also sometimes throw a [K-Pop] dance party over there called Happy Life Solution, and I’ve been extremely interested in this current wave of K-Pop music videos for a while now; their sort of insane visual splendor, just total decadence, I think far surpasses what’s happening in a lot of American pop music in the States. And we put together this panel to kind of dive a little further into this splendid artform. Especially with the sort of burgeoning global phenomenon that K-Pop is becoming. We’ve seen the obviously insane YouTube mash of “GangNam Style” — but we don’t have to talk about that; we’ve seen Diplo producing tracks with K-Pop idols G-Dragon and TOP; we’ve seen Girls Generation on Letterman… so I think that K-Pop’s steady march to world domination is an interesting thing to watch right about now.

Vivian Hua: Hi, I’m Vivian Hua; I run a magazine called REDEFINE magazine. It’s dedicated to kind of exploring the social implications of art and music. I was really obsessed with K-Pop as a teenager growing up, and with the recent kind of global interest in it, it’s kind of spurred my re-interest in it. Tonight, we’re just going to kind of talk about the social implications of K-Pop across the world. We have the session broken down into three segments: first, we’re going to talk about the technical details of filming it and aesthetics; then we’re going to talk about just gigantic boy and girl bands; and lastly, kind of the gender and social roles of what it means for South Korean society. Now, we’re going to open it up to our panelists to introduce themselves.

Ingmar Carlson: My name’s Ingmar Carlson; I’m in a local band called Shy Girls; we’re kind of an R&B sort of experience, but we’re definitely very influenced by K-Pop… I’d say I’m kind of a K-Pop fanatic. You’ll see on our website, which is really a Tumblr, we’re constantly putting up all sorts of imagery, stills, shots from K-Pop, all this sort of thing. Um, yeah. I DJ some K-Pop every now and then, when I can, in town as well, so look out for the moniker DJ Shinhwa.

Allen Huang: My name’s Allen Huang. I help DJ the JK Pop Night in Seattle; we play Japanese and Korean pop music — the poppier stuff, have people dance, have a good time. On the side, I am an album review editor at SSG Music, and I have a column there where I talk about pop culture. If you’re talking about pop culture in the 2010’s, you’re probably going to talk about K-Pop, so I do that a lot.

Reese Umbaugh: My name’s Reese Umbaugh. I coordinate JK Pop in Seattle along with Allen and Jordan, and I also work at KEXP in Seattle, and I review J-Pop and K-Pop for our World Music show.

Jordan Becke: I’m Jordan. I don’t actually DJ music; I run all of the videos at JK Pop. My segment goes first, so I’ll briefly run through that. Because I’m an editor, my interest comes down to how the videos are made, so I decided to focus on two aspects of K-Pop videos. One thing I noticed when watching a lot of videos is that there’s a lot of focus on in-camera effects instead of post-production, so they’ll do the lighting and the things in the scene, as opposed to taking it into an editor and doing things that way. And some of that is a product of sort of industrialization and studio systems that they have for the videos in Korea, so they’ll re-use the same sets… it also forces a lot of creativity in trying to maximize the video while minimizing the cost. My video is going to have two segments; the first segment will be focused on the use of lighting, which is really interesting in K-Pop videos, and the second will be about the way that titles are used — the way that the artist name and the song is integrated into the video itself, as opposed to being something that’s on top of the video that you view afterwards. So the first segment will be a lighting segment; the second section I’ve added my own title information so that you then can know what to look for in the scene.

Jordan Becke: There’s one thing I forgot to mention. At the beginning of the first segment, there’s an obviously live segment with G-Dragon; that was sort of the studio approach to some of the live shows they have. And again, the crazy digital approach is all on set; they weren’t doing anything post-production. So yeah, that was my segment; Reese is next.