“Nature as Queen”: An Embodied Philosophy

The cohesive force that stitched AUGMENT together was the showcase’s theme, “The New Nature.” Future Arts saw the necessity to have dialogue around how humanity can stay rooted in Source and the earth, while simultaneously embracing technological advancement.

“I think [COVID-19] was like a baseline reality shift for all of us…” says Bruk. “Everyone was kind of flailing and trying to figure out: what is that new normal? How do we connect in a more authentic way through technology?”

When it became safe for in-person events again, Future Arts saw an opportunity to incorporate the senses that society lost in isolation with interactive technologies, all while making a space that was accessible to multigenerational and multicultural audiences.

“I always say my goal is to have my family come out and ‘get’ it…” says Bruk, who comes from a family of non-native English-speaking immigrants and refugees. They also have a brother with an intellectual disability and found that growing up, very few places were inclusive of him. “I want to create a space where my family is welcome, and [where] I’m not afraid to bring [them] to that space.”

With the awareness that technology can pose many barriers for a variety of different reasons, Future Arts was intentional about making a free, publicly-accessible event. They also loaned out phones, made portable chargers available, and offered multiple tours in English and in American Sign Language, to introduce the artworks and instruct people on how to navigate the medium of AR. 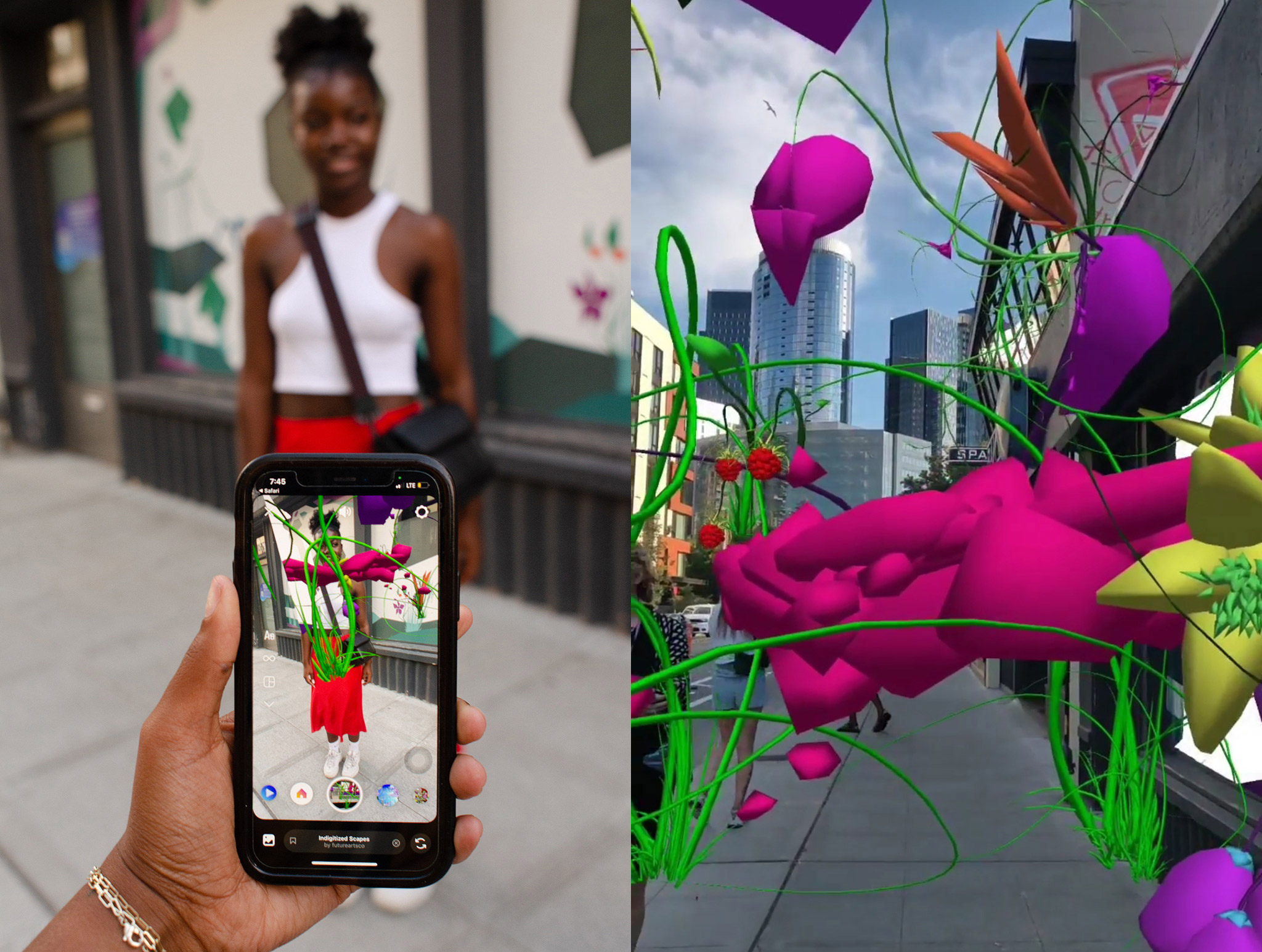 Being able to walk amongst — and through! — three-dimensional, large-scale native plants, while listening to the ancestral names given to them by the First Peoples of the land, reminded viewers of the plant relatives that once grew abundant beneath the cement and of the Coast Salish people who cared and continue to care for them.

Across the street, people gazed up and pointed their phones at seemingly empty space. “currents,” by Russianf urban designer and digital artist Alina Nazmeeva and Portland ecologist Alex Kosnett, intentionally used AR to superimpose a holographic salmon run in place of a construction site where a new high-rise will emerge in the coming months. Swirling “currents” of salmon, flowing in an infinite loop, helped stretch imaginations and visualized a future where flying fish signaled the coming change of the city’s landscape. “currents” worked to simultaneously mourn space soon to be forever altered while celebrating the unique role of salmon and other fish in the broader ecosystem of the Salish Sea.

Katharina 梁美花 Brinschwitz (she/they) is an interdisciplinary artist and writer who tells stories about identity, difference, and belonging as a means to intervene with oppressive forms of meaning-making. She has an intimate understanding of the power and responsibility that comes with media production and hopes to engage other artists, locally and globally, who are challenging colonialist-anthropological views through their art practice. She believes art can facilitate unprecedented healing for the community and earth. As a storyteller, their writing is colored through embodied wisdom of being a queer, neurodivergent, first-generation Asian-American femme. From birth to present day, they have lived and created on the unceded lands of the Duwamish Tribe and have immense gratitude for the land, sea, and the Coast Salish People who, since time immemorial, have been caring for them.