The Body as Glitched Out Form 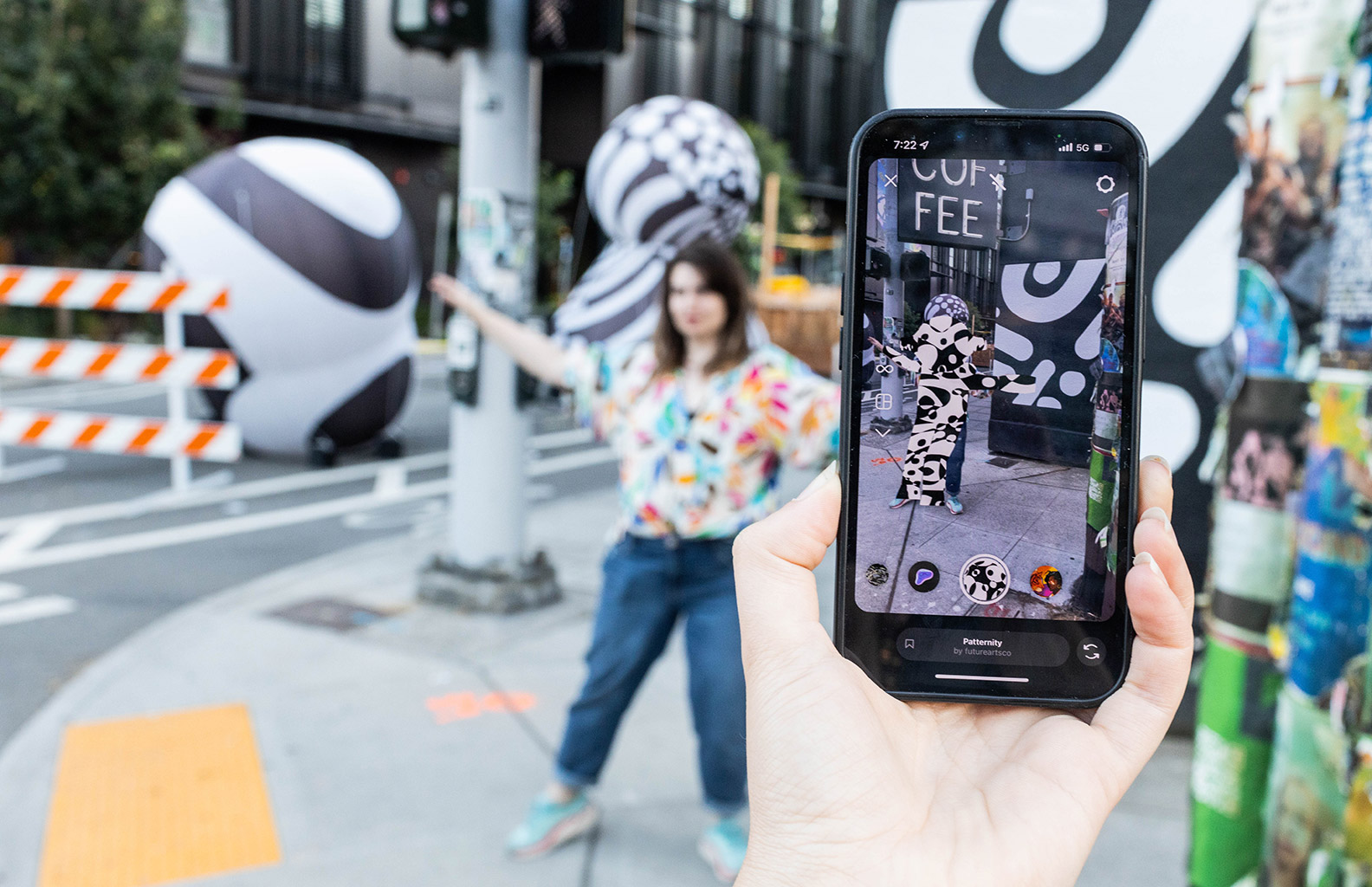 Several artists also chose to incorporate the human body into their installations, as a reminder that humans are inherently a part of nature’s past, present, and future. Some AR applications need a “target” in order to deploy its technology, such as how a face filter on Instagram needs to recognize one’s face before the filter can appear. “Patternity,” by Jamaican multidisciplinary artist and designer Tafui, was the only installation at AUGMENT that offered an intimate experience of requiring another person’s body to become the AR target.

Originally curated for and exhibited at VMF’s Winter Arts in Vancouver B.C, “Patternity” builds upon Tafui’s art practice, which uses bold black-and-white patterns to provide her audiences with an opportunity to embody the Jamaican saying, “Out of many, one people,” or the sentiment that despite our differences, our humanity unites us. Once the QR code for “Patternity” was scanned, a prompt “Find a friend” appeared on-screen; when another person stepped into the camera frame, shifting black and white shapes were overlaid onto their body, moving in tandem with the person’s movements. The interactivity of the piece resulted in organic connections between strangers, often filled with laughter and dance.

After being the first feminist digital art piece to go viral on multiple social media platforms in 2018, #GlitchGoddess by world-renowned three-dimensional computer graphics artist and animator, Marjan Moghaddam, made a reappearance for AUGMENT. Moghaddam’s projects are disruptions that ripple through the art, politics, culture, and philosophy of the globalized technological and anthropocenic world, often incorporating Moghaddam’s personal experience of being an Iranian refugee and that of femme experiences globally.

When its QR code was scanned, the #GlitchGoddess filter appeared with the prompt “Tap to Place,” and once a spot on the screen was touched, #GlitchGoddess came to life. In Moghaddam’s original style of animation called Chronometric Sculpture, the distorted #GlitchGoddess began to strut in place, as if walking a runway. Each subsequent time participants touched the runway model, her rippling red-white-black form morphed between figures that were slender and heavy; old and young; curved and angular. 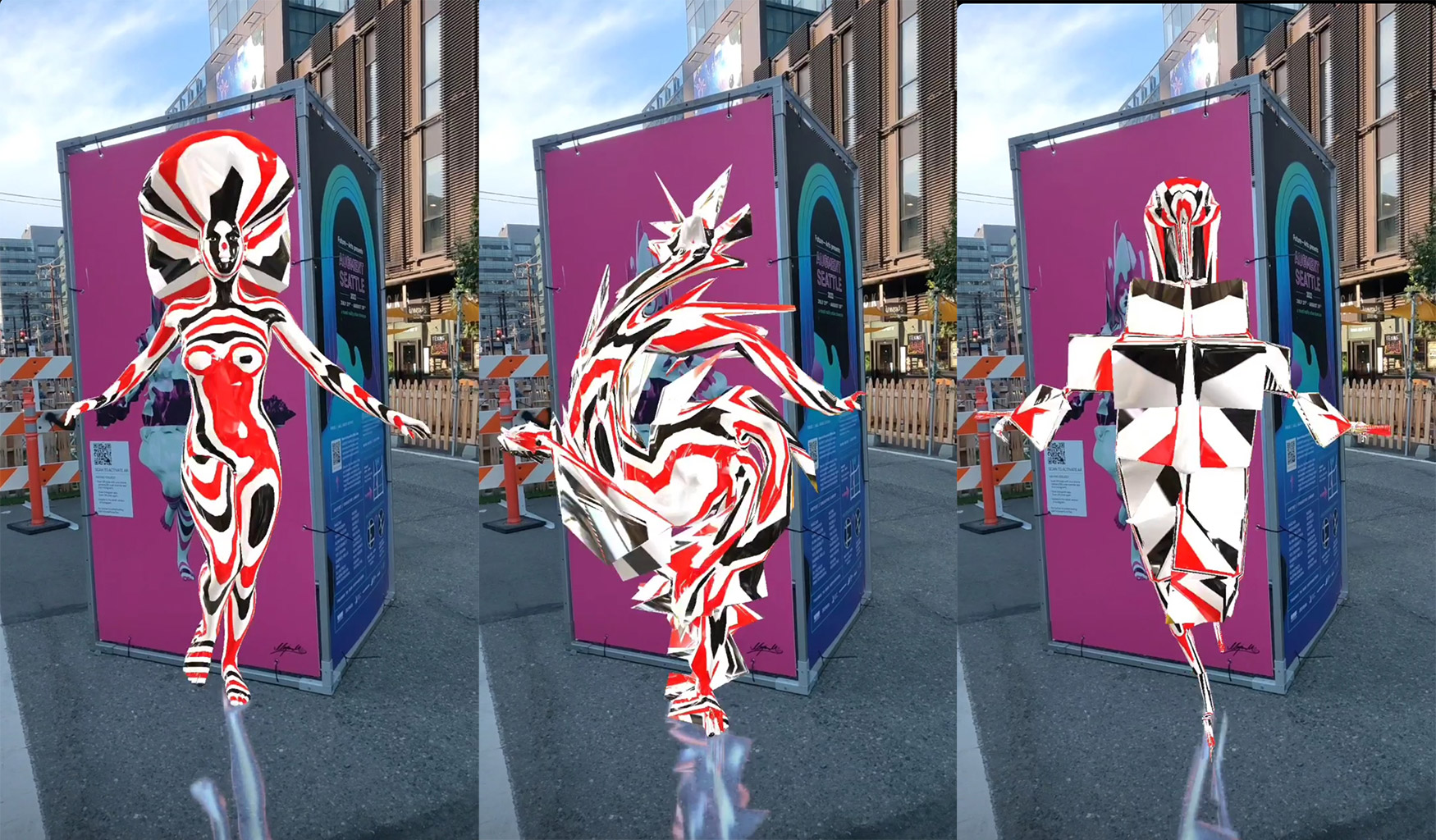 Katharina 梁美花 Brinschwitz (she/they) is an interdisciplinary artist and writer who tells stories about identity, difference, and belonging as a means to intervene with oppressive forms of meaning-making. She has an intimate understanding of the power and responsibility that comes with media production and hopes to engage other artists, locally and globally, who are challenging colonialist-anthropological views through their art practice. She believes art can facilitate unprecedented healing for the community and earth. As a storyteller, their writing is colored through embodied wisdom of being a queer, neurodivergent, first-generation Asian-American femme. From birth to present day, they have lived and created on the unceded lands of the Duwamish Tribe and have immense gratitude for the land, sea, and the Coast Salish People who, since time immemorial, have been caring for them.