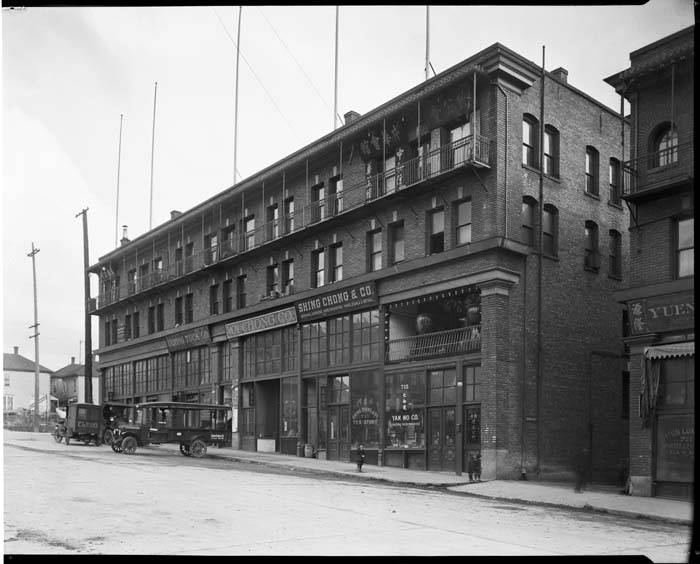 In 1907, Asian immigrants began moving their businesses into the area around Seattle’s King St. There, ethnic enclaves helped cultural and kinship ties and provided a sense of security from an often hostile white majority, as restrictive covenants prevented Asians from living elsewhere. The neighborhood grew into what is now known as the ethnically-diverse Chinatown-International District. This image was taken facing north east on S. King Street, between 7th Ave. and 8th Ave. The building featured here, the East Kong Yick Building (719 South King St.), was built in 1910. Since 2005, it has been home to the Wing Luke Museum of the Asian Pacific American Experience. (Credit: Webster & Stevens, circa 1920)

The Wing Luke Museum of the Asian Pacific American Experience, founded in 1967, boasts a rich archive of 168 videos on the Internet Archive. Its largest tape collection was donated by the Northwest Asian-American Theatre (NWAAT), which was started in 1972 by UW students. The museum shared a close relationship with the theater, according to Bob Fisher, a longtime curator at the Wing Luke. For several years, they shared a space in the Theatre Off Jackson, a renovated auto-shop, until NWAAT closed in 2004 and the Wing Luke moved to its current home in the historic Kong Yick buildings. NWAAT’s eclectic archives include the holiday show Winterfest, an annual open-mic or “showoff,” and dance and theater performances. Luminaries like the Gang of Four, a coalition of four Seattle minority rights leaders who founded enduring organizations in the ’60s and ’70s, would perform skits. Even Norm Rice, who served as Seattle’s first Black mayor from 1990-97, attended events there.

Perhaps the most memorable video is “Uncle Bob’s Neighborhood,” the hilarious hour-long stand-up set from Bob Santos (1934-2016), a Filipino Gang of Four member known as the “Mayor of Chinatown.” As Hopfauf puts it, watching and digitizing the tape was “honestly not even work. It is so fun to absorb all this stuff, it’s such a treat.”

With an easy warmth and charisma, Santos unspools his life story, starting with schoolyard fights with Norwegian-American bullies and sneaking whiskey and cigarettes from his blind father. These anecdotes also illuminate Santos’ radicalization. Even as a little kid, he wondered why German classmates weren’t being sent to internment camps. As a teen, he worked in the canneries in Alaska for two summers “like all good Filipino kids,” and quickly grasped the hierarchy: white superintendents, machinists, and fishermen, then Filipino laborers, whose living quarters were worse than the dog kennels, he says.

During the Civil Rights Movement, Santos agitated alongside Tyree Scott (1940-2003), who founded the United Construction Workers Association (UCWA), to fight for Black construction workers’ inclusion in trade unions and federal contracts. At the time, Washington state’s 29,000 trade union members included only seven non-white members. By disrupting construction sites, the UCWA forced the issue, and federal judges insisted on affirmative action for the unions. Yet when unions refused to meet those quotas, UCWA protesters shut down Seattle Central Community College in the summer of 1972 as white construction workers threw lumber at them.

As Santos recalls, he almost slipped out of the protest unseen. That is, until Michael K. Ross, a stubborn state representative and fellow activist, cheekily snitched on Santos, saying, “Hey officer, he’s with us!” Santos’ anecdotes are a veritable who’s-who of Seattle civil rights legends. While in a downtown Seattle jail, Santos started singing “We Shall Overcome,” expecting others to join in, until another activist exclaimed, “Bob, will you shut the fuck up?”

Decades later, Santos’ stories are a testament to the solidarity between Asian and Black communities in Seattle. Indeed, the UCWA was a financial backer and inspiration for the Alaska Cannery Workers Association (ACWA), which fought against the deplorable conditions for Filipino workers that Santos describes.

Later, as the director of the International District Improvement Association (known today as InterimCDA) from 1972 to 1989, Santos learned how to make change from the inside. He went to numerous political functions to get an ear with the mayor, and utilized goodwill from young Asian-American City Councilmember staffers to schedule meetings with their busy bosses. His stand-up set, digitized by MIPoPS, offers a case study in how to wield soft power.

One of Santos’ chief sources of ire was the construction of the Kingdome in 1972, which exacerbated traffic and displaced businesses in the Chinatown-International District (C-ID). A generation earlier, in the ’60s, the construction of I-5 tore through the neighborhood, destroying reams of low-income housing. Fisher describes an ongoing pattern of such disruption, citing the 1929 extension of 2nd Ave S which cut through the C-ID and destroyed several historic buildings. Many families migrated to the current-day C-ID location on King St., in part due to such projects. 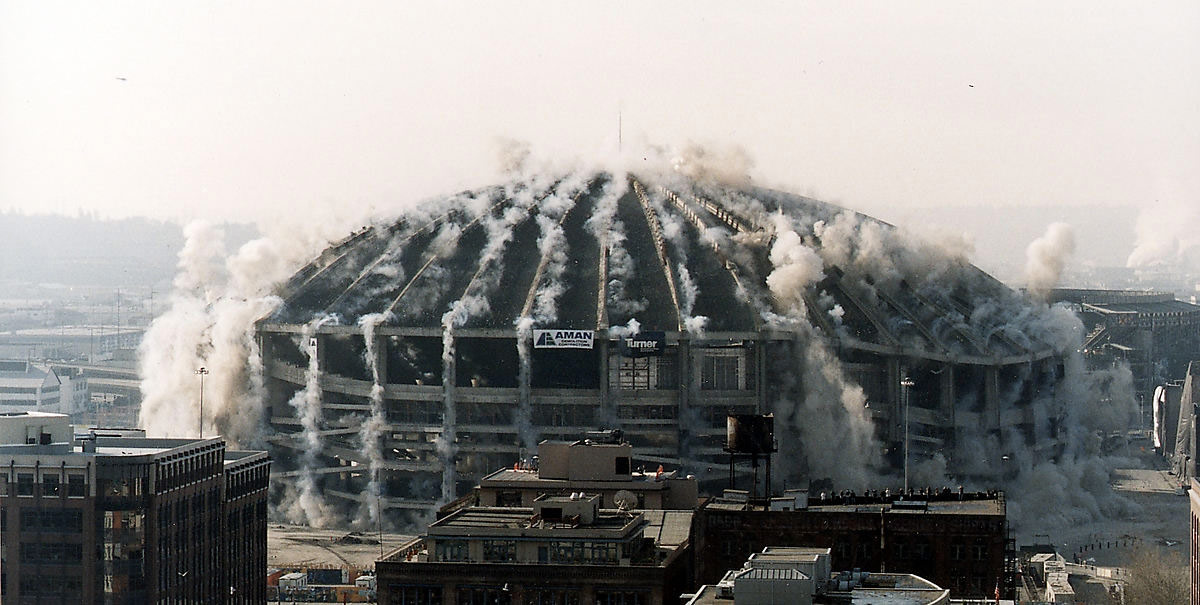